A 50-year-old man from Makueni County is behind bars for defiling his 10-year-old daughter.

According to the reports, the man defiled the minor while her mother was away to fetch firewood.

John Muema Ndilu, was taken in by the police today afternoon, after the young girl in the company of her mother reported the case.

In the report, the shameful act was committed on September 28. The man then went ahead to warn the girl that she would be killed if she dared report or mention to anyone about the incident.

Unknown to him, the girl decided to open up to her mother today which prompted the mother to act immediately. The wife, 36 has been left in shock, unable to comprehend the happenings.

With the suspect in the cells, the girl has been taken for examination in the nearest hospital.

The apprehension is set to happen soon as police continue to probe into the matter. 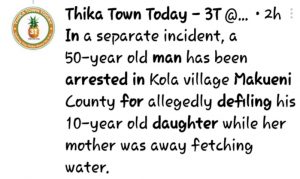