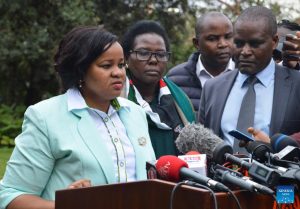 Another painful situation as Police are investigating the mysterious disappearance of an Independent Elections and Boundaries Commission IEBC IT expert, known as Japhet Dibo, who temporarily worked with IEBC in the just-concluded General Election reportedly goes missing.

According to a police report filed at Kilimani Police Station, Dibo, was at his KISM office located along Ngong road on August 18th, 2022 before his disappearance.

He reportedly had escorted an unknown visitor who had gone to his company but he never returned.

“It was reported by one Flora Aluoch that on Thursday, August 19, 2022, her husband Japhet Dibo who owns Dial Africa, an information technology company located along Ngong road KISM building went missing.”

“The said man was working with the IEBC temporarily during the just concluded General Election as an IT consultant,” the police report read in part.

This comes days after Daniel Musyoka, an employee of the IEBC, vanished on August 11, 2022, and was later discovered dead in Oloitoktok. At 9:45 am, he vanished from the East African School of Aviation tallying center. He appeared to have been tortured to death, according to police who responded to the scene.

Daniel Mbolu Musyoka, a member of the Embakasi East Electoral and Boundaries Commission (IEBC), was discovered dead in Kajiado. His body was found by herders on Monday night in a river adjacent to the Kilombero woodland in Oloitoktok, according to Loitoktok Police Commander Kipruto Ruto.

At the Loitokitok sub-county mortuary, his body was identified by his sisters Mary Mwikali and Ann Mboya. Musyoka went missing while working at the East African School of Aviation Tallying Center, according to IEBC Chair Wafula Chebukati during the press conference held at Bomas on Friday evening.

According to unconfirmed information obtained by Sonko News, the late Embakasi returning officer Daniel Musyoka may have fallen prey to politicians who demanded a favour from him. Daniel Musyoka was a man of great integrity who was resolved to carry out his duties conscientiously without being compromised in the local elections, according to a source who knew the returning officer.

His firm stance eventually alienated several unnamed leaders who were eager to hire him to influence the outcome in their favour. According to what the Returning Officer said, the late even admitted to them at one time that odd persons were contacting him with large quantities of money, which he refused to accept.