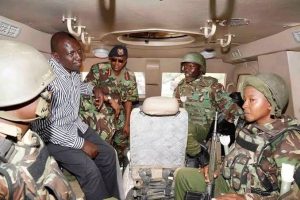 The International Criminal Court has spoken on what conditions they might arrest Deputy President William Ruto and the other two facing criminal charges of what transpired in the 2007/08 post-election violence, issuing conditions of what will happen today.

Prosecutors have informed that the fate of DP Ruto together with Mr. Maiyo and Simatwo a former Director at the Amaco Insurance will be determined today, with the prosecution saying that their arrest will depend on the outcome of the Gicheru case.

According to the Prosecution, It has detailed that Mr. Simatwo and Mr. Maiyo “made essential contributions to the charged offenses and worked with Lawyer Gicheru to coordinate with Deputy President William Ruto” on witness bribery to hide evidence.

Adding that the two with the alleged funding from DP Ruto, “also participated in meetings between Mr. Gicheru and prosecution witnesses during which they were corruptly influenced.”