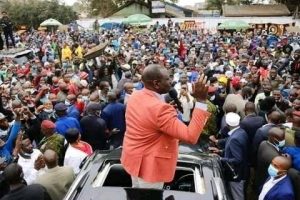 While delivering his speech, the second in command attacked the Orange Democratic Movement Party leader Raila Odinga after he asked the residents where Raila was when President Uhuru Kenyatta wanted a man to stand with him during the 2013 and 2017 general election terming him as “Mtu was kitendawili” leaving the elated crowd chanting endlessly.

He went ahead to cite that H.E Raila is a political imposter and conman who has derailed his big four agendas with President Uhuru Kenyatta by using the ttaxpayer’smoney while trying to create political positions for his advances

Deputy President is also expected to camp in Meru County for two days seeking to reclaim lost ground with a new strategy as his political handlers allegedly say they will use defections, targeted propaganda to tone down on attacks on President Uhuru Kenyatta to win the hearts of the electorates, as well as popularize his bottom-up economy model.

Here is the video

Dear readers, who between Raila and Ruto will you vote as your next President? Please leave your thoughts in the comments section and follow for more news updates.