The Azimio brigades are in the region doing their final touches with only 6 days remaining to the much-awaited general where Kenyans will be heading to the ballot seeking to elect new leaders starting from the Members of County assembly seat, to the Presidential seat. 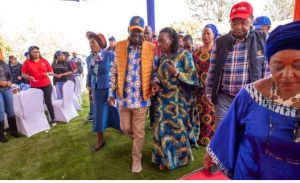 The Azimio brigades are hosted by hopefully incoming Kisii County Governor Hon. Simba Arati, and accompanied by several Azimio leaders from across the country including, Francis Atwoli, Ali Hassan Joho, Peter Kenneth, Sabina Chege, and Junet Mohammad, among many others.

This comes at a time where according to IPSOS Polls If elections were held today, the Azimio la Umoja one Kenya Alliance Coalition presidential candidate Rt Hon. Raila Odinga and his running mate Hon Martha would have won with 47% against Deputy President and the Kenya Kwanza coalition presidential candidate Dr. William Samoei Ruto and his running mate Hon. Rigatoni Gachagua will come second with 41%.

PAY ATTENTION: Share your outstanding story with our editors! Please reach us through admin@lakeside.co.ke or WhatsApp: 0701490148

With 8% of DP William Samoei Ruto’s supporters think former prime minister Raila Amolo Odinga will win the election and 92% of Raila Odinga’s supporters are sure Ruto won’t win this election. 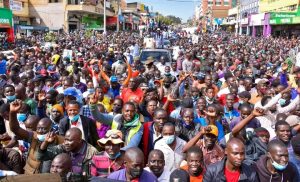 Raila Odinga posed to win based on how he impressed undecided voters in western, Coast, and central (Nyandarua).