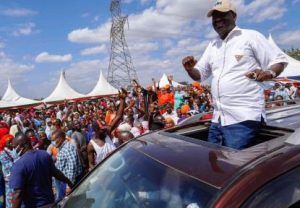 The former prime minister and the Orange Democratic Movement party leader right Hon. Raila Amolo Odinga while attending Yesterday’s Azimio La mama in Nairobi county seems to have introduced a new dancing style while he joined a group of musicians where he was filmed endlessly dancing while jumping up and down like a young energetic man.

The hopeful income Kenya’s fifth President, Hon. Raila Odinga has for along seen to be a true lover of music as he is perceived to be one of the reggae music lovers following the music used during his campaign tours across the Nation.

The ODM boss who to his supporters, he is a Democrat who has sacrificed a lot in his fight against dictatorship but others see him as a scheming and selfish person, who will do anything to gain power.

His strongest following is among his Luo community in the southwestern region of Nyanza, where he was born and went to school.

They have given him several nicknames over the years, including Tinga (tractor), Agwambo (the act of god), and Baba (father).