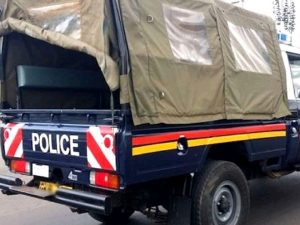 2 men are now cooling their heels in the Sotik police station for defiling a minor. According to the police, the two men defiled a 16-year-old school-going girl and later locked her up in a lodging.

The two were spotted by a concerned member in the company of the young girl. The man out of suspicion reported them to the area assistant chief.

The assistant chief to be sure about the information headed straight to the said lodging. He found the two in the lodging, locked inside with the young girl.

At fir, st they were unwilling to open but the arrival of the police prompted them to open and surrender. 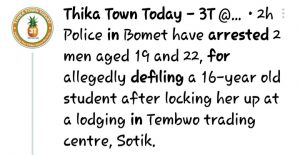 The police laterescueded the girl who is a student at a local high school dan took her for medical examination. The two are waiting for arraignment in the court of law.