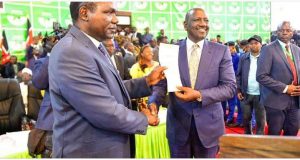 IEBC commissioner Justus Nyang’aya has laid bare the vote fraud that was perpetuated at Bomas as the country awaits the supreme court to nullify the otherwise sham election.

The foreigner would pull down results and using ID “0” and later upload fresh ones. The result would see William Ruto accorded at least 554,738 votes.

In another sworn affidavit, commissioner Juliana Cherera also recounts how chairman Wafula Chebukati assigned the commissioners extra roles so that he was left all alone to do the tallying and eventually tilt the election in Ruto’s favour. 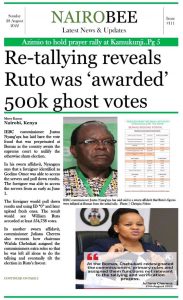 In Other News Updates

While taking to his hugely followed Facebook page, Wahome Thuku pointed out that “by now, (and Iam not wrong), the 7 judges have already held a panel and gone through all the affidavits with toothpicks. By the time they appear in open court, they will simply “guide” the parties on just what to address.

For your information, a case is set out in a petition and supported with affidavits. The rest of the load (lorry full) is just for illustration.

I must say that as the Supreme Court goes to hear the fourth petition, the judges have refined their “hearing” and “determination” skills. That is why I always support every election being taken to that court. That’s how our jurisprudence will grow.”

According to the lawmaker here are the seven things the court will rely on while giving the final ruling;

1. Did Kenyans vote freely and fairly

2. Were all their votes counted?

3. Were there votes not cast but counted?

4. Were the votes cast tallied properly?

5. Were the uncasted votes also tallied

6. Did the properly tallied votes produce a clear winner as per the constitution and the law?

7. Is there evidence to show all the above?

“That is all we will need to hear this week. We have only 7 days, no time for shenanigans. Hizo zingine ni hekaya za Abunuasi.” He said